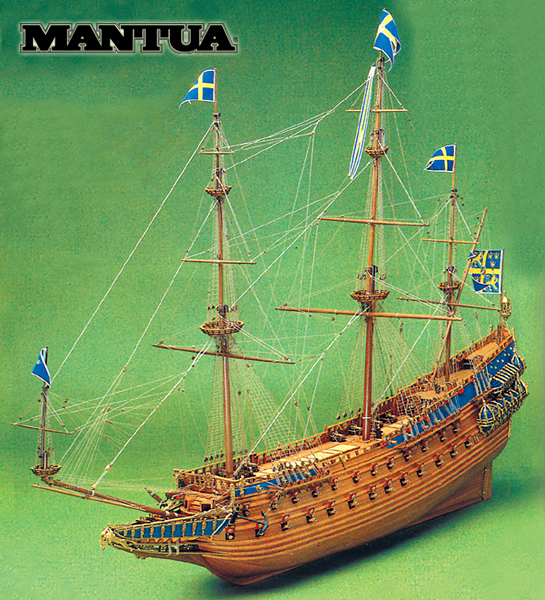 The Vasa 1626-28 was the largest ship ever built in Sweden at that time, she weighed in at approximately 1,400 tons and carried 64 guns.

The Vasa 1626-28 was the largest ship ever built in Sweden at that time, she weighed in at approximately 1,400 tons and carried 64 guns. At about 3.30 pm. on 10th August 1628 she was towed out to open water to gain a head wind and upon hoisting her sails she heeled over so violently that the sea entered her lower gun ports and in a matter of minutes she sank to the bottom of the sea, where she stayed until finally being raised in 1959-61 and is now located in the Vasa wharf in Stockholm.

In the early 17th century, Sweden was busy building an empire around the Baltic Sea in northern Europe. A strong navy was essential. During the 1620s Sweden was at war with Poland. In 1625 the Swedish king Gustavus Adolphus ordered new warships, among them the Vasa.
The Vasa was built at the Stockholm shipyard by Henrik Hybertsson - an experienced Dutch shipbuilder. His experience was much needed as the Vasa was to be the mightiest warship in the world, armed with 64 guns on two gun decks.
In 1628 the ship was ready. Sunday August 10 was the day of the Vasa's maiden voyage. The beaches around Stockholm were filled with spectators, among them foreign diplomats. The maiden voyage was to be an act of propaganda for the ambitious Swedish king Gustavus Adolphus.
The Vasa set sail and fired a salute. But only after a few minutes of sailing the ship began to heel over. She righted herself slightly - and heeled over again. Water started to gush in through the open gun ports. And, to everyone’s horror and disbelief, the glorious and mighty warship suddenly sank! Of the 150 people on board, 30-50 died in the disaster. When Vasa had been salvaged in 1961, archaeologists found the remains of 25 skeletons.
After the disaster the captain of the Vasa - Söfring Hansson - was arrested. The Swedish king Gustavus Adolphus was not in Sweden at the time. He was waging war in Poland. It took two weeks for him to learn about what had happened. When he did, he wrote angrily that the disaster had happened because of "imprudence and negligence" and that the guilty parties had to be punished. Söfring Hansson and many others were called to inquiries at the Royal Castle of Stockholm.
At the inquest people were troubled by the fact that the shipbuilder Henrik Hybertsson had died the year before the Vasa was completed. Instead his brother and partner, Arendt de Groot, was held responsible for the completion of the ship. But in the end no one was condemned for causing the disaster. The people in charge of the inquiries concluded that the ship was well built - but badly proportioned.

One of the most popular attractions in Sweden since her recovery, Wasa is the centrepiece of the Statens Sjohistoriska Museum on the Stockholm waterfront.