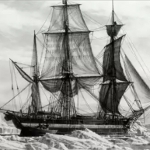 Franklin's lost expedition was a British voyage of Arctic exploration led by Captain Sir John Franklin that departed England in 1845 aboard two ships, HMS Erebus and HMS Terror. A Royal Navy officer and experienced explorer, Franklin had served on three previous Arctic expeditions. His fourth and last, was meant to traverse the last unnavigated section of the Northwest Passage. After a few early fatalities, the two ships became icebound in Victoria Strait, near King William Island in the Canadian Arctic. The entire expedition, comprising 129 men including Franklin, was lost.

MS Erebus and HMS Terror ships, participants of Franklin's mysterious expedition
Franklin's lost expedition was a British voyage of Arctic exploration led by Captain Sir John Franklin that departed England in 1845 aboard two ships, HMS Erebus and HMS Terror. A Royal Navy officer and experienced explorer, Franklin had served on three previous Arctic expeditions. His fourth and last, was meant to traverse the last unnavigated section of the Northwest Passage. After a few early fatalities, the two ships became icebound in Victoria Strait, near King William Island in the Canadian Arctic. The entire expedition, comprising 129 men including Franklin, was lost.

Northwest Passage
The search by Europeans for a western shortcut by sea from Europe to Asia began with the voyages of Christopher Columbus in 1492 and continued through the mid-19th century with a long series of exploratory expeditions originating mainly in England. In 1804, Sir John Barrow became Second Secretary of the Admiralty, and began a push by the Royal Navy to complete the Northwest Passage over the top of Canada and to navigate toward the North Pole. Over the next four decades, explorers made productive trips to the Canadian Arctic. By 1845, the combined discoveries of all of these expeditions had reduced the relevant unknown parts of the Canadian Arctic to a quadrilateral area of about 181,300 km2 (70,000 sq mi).

Preparation, ships and provisions
Erebus at 378 tons (bm) and Terror at 331 tons (bm) were sturdily built, and were outfitted with recent inventions. Steam engines were fitted in to drive a single screw in each vessel; these engines were former locomotives from the London & Croydon Railway. They enabled the ships to make 7.4 km/h (4 kn) on their own power. Other advanced technology included bows reinforced with heavy beams and plates of iron, an internal steam heating device for the comfort of the crew, screw propellers and iron rudders that could be withdrawn into iron wells to protect them from damage, ships' libraries of more than 1,000 books, and three years' worth of conventionally preserved or tinned preserved food supplies. 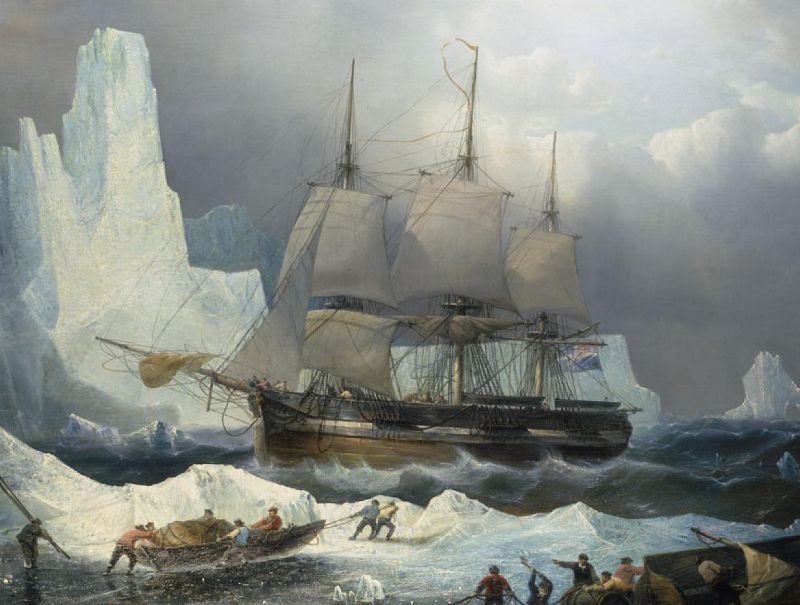 HMS Erebus and HMS Terror on its last voyage
The expedition set sail from Greenhithe, England, on the morning of 19 May 1845, with a crew of 24 officers and 110 men. The ships stopped briefly in Stromness Harbour in the Orkney Islands in northern Scotland, and from there they sailed to Greenland with HMS Rattler and a transport ship, Barretto Junior. At the Whalefish Islands in Disko Bay, on the west coast of Greenland, 10 oxen carried by the transport ship were slaughtered for fresh meat; supplies were transferred to Erebus and Terror, and crew members wrote their last letters home. Letters written on board told how Franklin banned swearing and drunkenness. Before the expedition's final departure, five men were discharged and sent home on Rattler and Barretto Junior, reducing the ships' final crew size to 129.
The expedition was last seen by Europeans in late July 1845, when Captain Dannett of the whaler Prince of Wales and Captain Robert Martin of the whaler Enterprise encountered Terror and Erebus in Baffin Bay, waiting for good conditions to cross to Lancaster Sound. 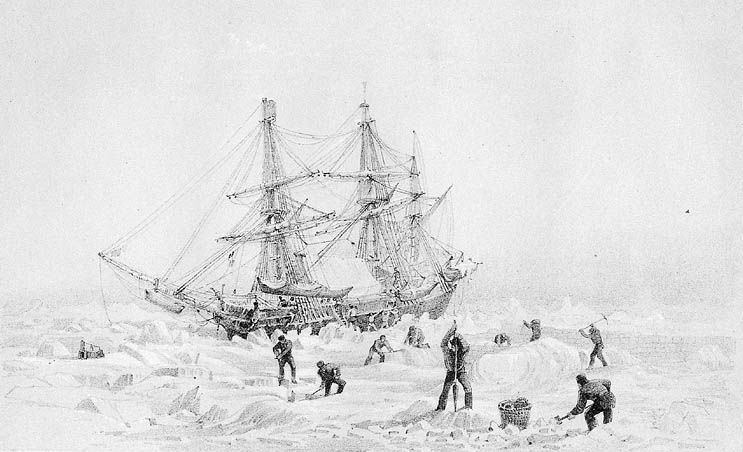 What happened next?
Over the next 150 years, many other expeditions, explorers, and scientists would piece together what happened next. Franklin's men wintered in 1845–46 on Beechey Island, where three crew members died and were buried. Terror and Erebus became trapped in ice off King William Island in September 1846 and are believed to have never sailed again. According to a note dated 25 April 1848, and left on the island by Fitzjames and Crozier, Franklin had died on 11 June 1847; the crew had wintered on King William Island in 1846–47 and 1847–48, and the remaining crew had planned to begin walking on 26 April 1848 toward the Back River on the Canadian mainland. Nine officers and fifteen men had already died; the rest would die along the way, most on the island and another 30 or 40 on the northern coast of the mainland, hundreds of miles from the nearest outpost of Western civilization. 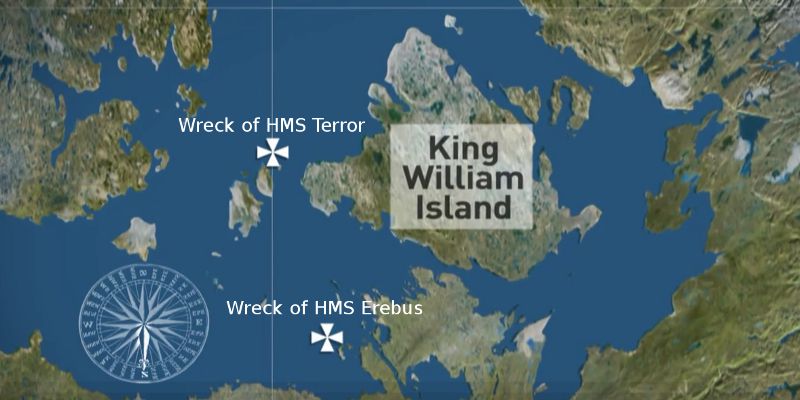 HMS Erebus and HMS Terror were finally found
There were many search expeditions which collected some artefacts and some testimonies but final position of ships were discovered in 2014 and 2016.
On 1 September 2014, a larger search by a Canadian team under the banner of the "Victoria Strait Expedition" found two items on Hat Island in the Queen Maud Gulf near Nunavut's King William Island— a wooden object, possibly a plug for a deck hawse, the iron pipe through which the ship's chain cable would descend into the chain locker below; and part of a boat-launching davit bearing the stamps of two Royal Navy broad arrows.
On 9 September 2014, the expedition announced that on 7 September it had located one of Franklin's two ships. The ship is preserved in very good condition, with side-scan sonar picking up even the deck planking. The wreck lies at the bottom of the eastern portion of Queen Maud Gulf, west of O'Reilly Island. On 1 October was confirmed that the wreck is indeed HMS Erebus.
On 12 September 2016, it was announced that the Arctic Research Foundation expedition had found the wreck of HMS Terror south of King William Island in Terror Bay. 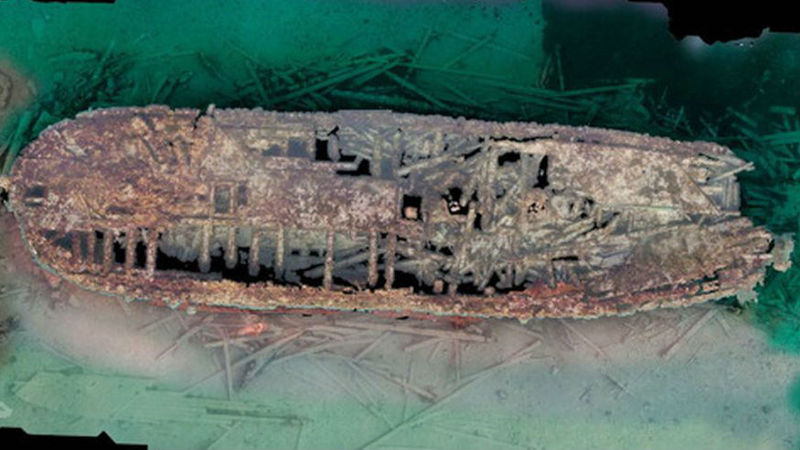 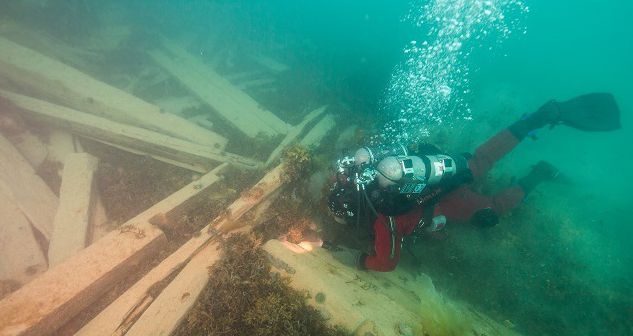 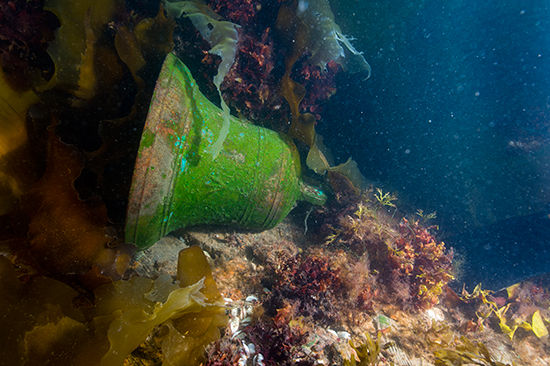