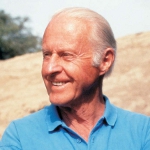 Kon-Tiki was the raft used by Norwegian explorer and writer Thor Heyerdahl in his 1947 expedition across the Pacific Ocean from South America to the Polynesian islands. It was named after the Inca sun god, Viracocha, for whom "Kon-Tiki" was said to be an old name.
The Kon-Tiki expedition was funded by private loans, along with donations of equipment from the United States Army. Heyerdahl and a small team went to Peru, where, with the help of dockyard facilities provided by the Peruvian authorities, they constructed the raft out of balsa logs and other native materials in an indigenous style as recorded in illustrations by Spanish conquistadores. The trip began on April 28, 1947. Heyerdahl and five companions sailed the raft for 101 days over 6900 km (4,300 miles) across the Pacific Ocean before smashing into a reef at Raroia in the Tuamotu Islands on August 7, 1947. The crew made successful landfall and all returned safely.

Anthropology was at the beginning
Heyerdahl believed that people from South America could have settled Polynesia in pre-Columbian times. Although most anthropologists as of 2010 had come to the conclusion they did not, in 2011, new genetic evidence was uncovered by Erik Thorsby that Easter Island inhabitants in fact do have some South American DNA, lending credence to at least some of Heyerdahl's theses. His aim in mounting the Kon-Tiki expedition was to show, by using only the materials and technologies available to those people at the time, that there were no technical reasons to prevent them from having done so. Although the expedition carried some modern equipment, such as a radio, watches, charts, sextant, and metal knives, Heyerdahl argued they were incidental to the purpose of proving that the raft itself could make the journey.

Brave crew
Kon-Tiki had a six-man crew, all of whom were Norwegian except for Bengt Danielsson, a Swede. 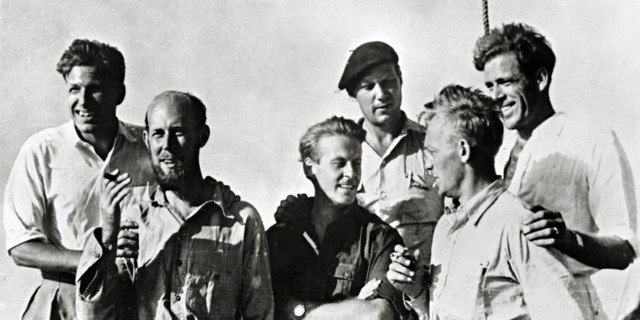 Raft construction followed from historical sources
The main body of the float was composed of nine balsa tree trunks up to 45 ft. long, 2 ft. in diameter, lashed together with 1? inch hemp ropes. Cross-pieces of balsa logs 18 ft. long and 1 ft. in diameter were lashed across the logs at 3 ft. intervals to give lateral support. Pine splashboards clad the bow, and lengths of pine 1 inch thick and 2 ft. wide were wedged between the balsa logs and used as centreboards. The main mast was made of lengths of mangrove wood lashed together to form an A-frame 29 ft high. Behind the main-mast was a cabin of plaited bamboo 14 ft. long and 8 ft. wide was built about 4–5 ft. high, and roofed with banana leaf thatch. At the stern was a 19 ft. long steering oar of mangrove wood, with a blade of fir. The main sail was 15 by 18 ft. on a yard of bamboo stems lashed together. Photographs also show a top-sail above the main sail, and also a mizzen-sail, mounted at the stern. The raft was partially decked in split bamboo. The main spars were a laminate of wood and reeds and Heyerdahl tested more than twenty different composites before settling on one that proved an effective compromise between bulk and torsional rigidity. No metal was used in the construction. Raft description is based on Heyerdahl´s book and the raft in the Kon-Tiki Museum, Oslo. 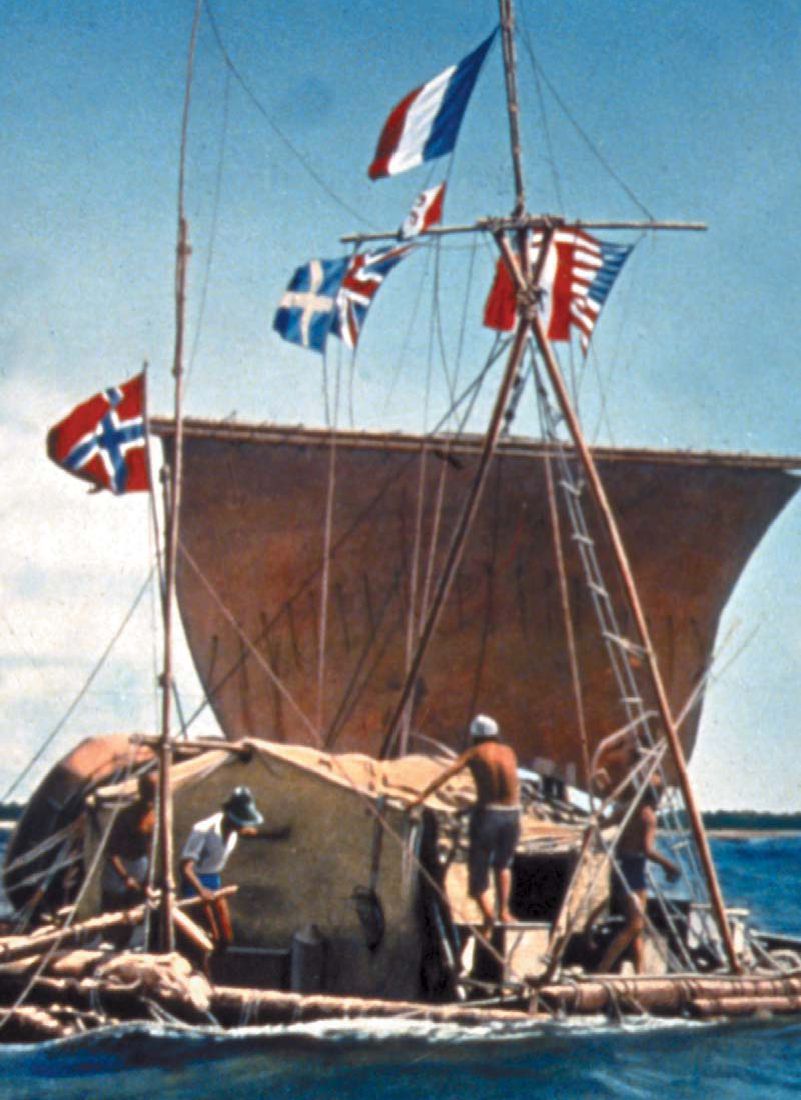 Supplies for six men
Kon-Tiki carried 275 gallons of drinking water in 56 water cans, as well as a number of sealed bamboo rods. The purpose stated by Heyerdahl for carrying modern and ancient containers was to test the effectiveness of ancient water storage. For food Kon-Tiki carried 200 coconuts, sweet potatoes, bottle gourds and other assorted fruit and roots. The U.S. Army Quartermaster Corps provided field rations, tinned food and survival equipment. In return, the Kon-Tiki explorers reported on the quality and utility of the provisions. They also caught plentiful numbers of fish, particularly flying fish, "dolphin fish", yellowfin tuna, bonito and shark.

Communications with rest of the world
The expedition carried an amateur radio station with the call sign of LI2B operated by former World War II Norwegian underground radio operators Knut Haugland and Torstein Raaby. Haugland and Raaby maintained regular communication with a number of American, Canadian, and South American stations that relayed Kon Tiki's status to the Norwegian Embassy in Washington, D.C. On August 5, Haugland made contact with a station in Oslo, Norway, 10,000 miles away. Kon Tiki's transmitters were powered by batteries and a hand-cranked generator and operated on the 40-, the 20-meter band, the 10-meter band, and the 6-meter band. Each unit was water resistant and included 2E30 vacuum tubes providing 10 watts of RF input and approximately 6 watts of output; the equivalent of a small flashlight. A German Mark V transceiver was used as a backup unit. The radio receiver used throughout the voyage was a National Radio Company NC-173, once requiring a thorough drying out after being soaked during a shipwreck. An "all well, all well" message was sent via LI2B to notify would-be rescuers of the crew's safety. The call sign LI2B was used by Heyerdahl again in 1969–70, when he built a papyrus reed raft and sailed from Morocco to Barbados in an attempt to show a possible link between the civilization of ancient Egypt and the New World. 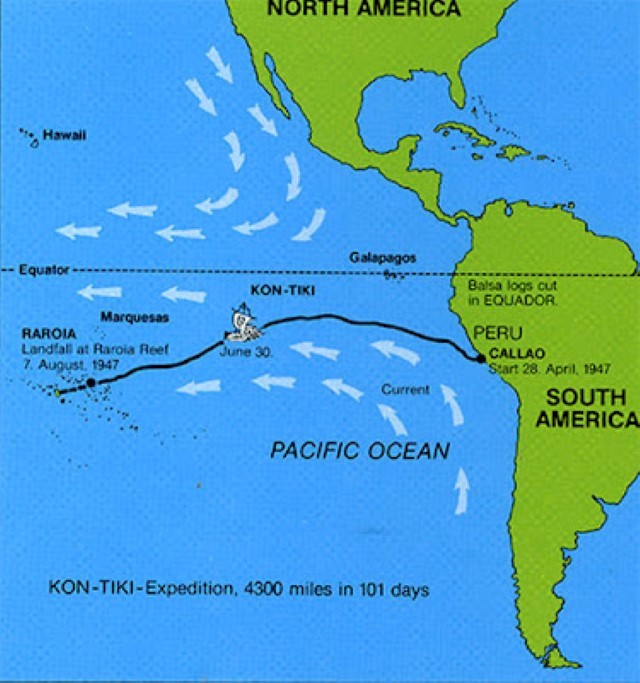 The voyage
Kon-Tiki left Callao, Peru, on the afternoon of April 28, 1947. To avoid coastal traffic it was initially towed 50 miles out by the Fleet Tug Guardian Rios of the Peruvian Navy, and then sailed roughly west carried along on the Humboldt Current. The crew's first sight of land was the atoll of Puka-Puka on July 30. On August 4, the 97th day after departure, Kon-Tiki reached the Angatau atoll. The crew made brief contact with the inhabitants of Angatau Island, but were unable to land safely. Calculations made by Heyerdahl before the trip had indicated that 97 days was the minimum amount of time required to reach the Tuamotu islands, so that the encounter with Angatau showed that they had made good time. On August 7, the voyage came to an end when the raft struck a reef and was eventually beached on an uninhabited islet off Raroia atoll in the Tuamotu group. The team had travelled a distance of around 3,770 nautical miles (c. 6,980 km (4,340 mi)) in 101 days, at an average speed of 1.5 knots. After spending a number of days alone on the tiny islet, the crews were greeted by men from a village on a nearby island who arrived in canoes, having seen washed-up flotsam from the raft. The crews were taken back to the native village, where they were feted with traditional dances and other festivities. Finally the crew was taken off Raroia to Tahiti by the French schooner Tamara, with the salvaged Kon-Tiki in tow.

Later recreations of Kon-Tiki
There were many recreations of Kon-Tiki. First of them was Seven Little Sisters raft. In 1954 William Willis sailed alone on a raft Seven Little Sisters from Peru to American Samoa, successfully completing the journey. He sailed 6,700 miles, which was 2,200 miles farther than Kon-Tiki. In a second great voyage ten years later, he rafted 11,000 miles from South America to Australia with a metal raft Age Unlimited.

Sources for further study
Thor Heyerdahl's book about his experience became a bestseller. It was published in 1948 as The Kon-Tiki Expedition: By Raft Across the South Seas, later reprinted as Kon-Tiki: Across the Pacific in a Raft. A documentary motion picture about the expedition, also called Kon-Tiki was produced from a write-up and expansion of the crew's filmstrip notes and won an Academy Award in 1951. It was directed by Thor Heyerdahl and edited by Olle Nordemar. The voyage was also chronicled in the documentary TV-series The Kon-Tiki Man: The Life and Adventures of Thor Heyerdahl, directed by Bengt Jonson. The Kon-Tiki raft is now on display in the Kon-Tiki Museum in Oslo.