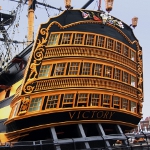 HMS Victory is a 104-gun ship of the line of the Royal Navy, built between 1759 and 1765. She is the oldest naval ship still in commission and the only remaining ship of the line. She sits in dry dock in Portsmouth as a museum ship.

In December 1758, the commissioner of Chatham Dockyard was instructed to prepare a dry dock for the construction of a new 100-gun first-rate ship. This was an unusual occurrence at the time; during the whole of the 18th century only ten were constructed—the Royal Navy preferred smaller and more maneuverable ships and it was unusual for more than two to be in commission simultaneously. The outline plans arrived in June 1759 and were based on HMS Royal George which had been launched at Woolwich Dockyard in 1756.

The keel was laid on 23 July 1759 in the Old Single Dock (now No. 2 Dock), and the name was finally chosen in October 1760. It was to commemorate the Annus Mirabilis or Year of Victories, of 1759. In that year of the Seven Years' War, land victories had been won at Quebec, Minden and naval battles had been won at Lagos and Quiberon Bay. There were some doubts as whether this was a suitable name since the previous first-rate Victory had been lost with all on board in 1744.

Once the frame had been constructed it was normal to cover the ship up and leave it for several months to season. However, the end of the Seven Years' War meant that she remained in this condition for nearly three years, which helped her subsequent longevity. Work restarted in autumn 1763 and she was finally launched on 7 May 1765 having cost L63,176 and 3 shillings (present day L50 million) and used around 6000 trees, 90% of which were oak and the remainder elm, pine and fir.

There being no immediate use for her she was placed in ordinary— in reserve having been roofed over, demasted and placed under general maintenance—moored in the River Medway for 13 years until France joined the American War of Independence.

Keppel put to sea from Spithead on July 9, 1778, with a force of 30 ships of the line and, on July 23rd, sighted a French fleet of 29 sail 100 miles (160 km) west of Ushant. The French Admiral, the Comte d'Orvilliers, who had orders to avoid battle, was cut off from Brest but retained the weather gage. Two of his ships to windward escaped into port leaving him with 27. The two fleets maneuvered during shifting winds and a heavy rain squall until a battle became inevitable with the British more or less in column and the French in some confusion. However, the French managed to pass along the British line to windward with their most advanced ships. At about a quarter to twelve Victory opened fire on the Bretagne, 110, followed by the Ville de Paris, 90. The British van escaped with little loss but Sir Hugh Palliser's rear division suffered considerably. Keppel made the signal to wear and follow the French but Palliser did not conform and the action was not resumed. Keppel was court martialed and cleared and Palliser criticized by an inquiry before the affair turned into a party political squabble.

In March 1780 the hull below the waterline was sheathed with 3,923 sheets of copper to protect it against shipworm. 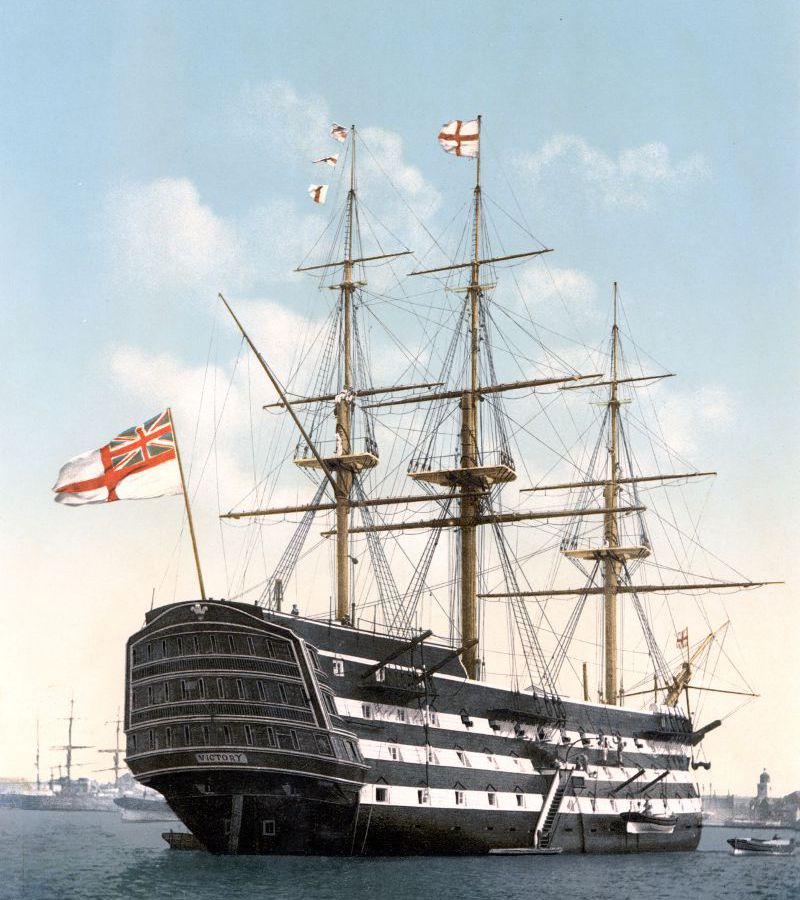 On December 2, 1781, Victory, now commanded by Captain Henry Cromwell and bearing the flag of Rear Admiral Richard Kempenfelt, sailed with 11 other ships of the line, a 50 and five frigates, to intercept a convoy that sailed from Brest on December 10. Ignorant of the fact that the French Comte de Guichen had 21 ships of the line, Kempenfelt ordered a chase when they were sighted on December 12 and began the Second Battle of Ushant. When he noted the French superiority he contented himself with capturing 15 sail of the convoy. The French were dispersed in a gale and forced to return home.

In 1796 Captain Robert Calder (First Captain) and Captain George Grey (Second Captain) commanded Victory under Admiral Sir John Jervis's flag. Sir John Jervis sailed from the Tagus on January 18, 1797, and after being reinforced on February 6 by five ships from England, his fleet consisted of 15 sail of the line and six frigates. On February 14, the Portuguese frigate Carlotta, commanded by a Scotsman named Campbell with a Portuguese commission, brought news that a Spanish fleet was close. Jervis maneuvered to intercept, and the Battle of Cape St Vincent was joined. Principe de Asturias, leading the Spanish lee division, tried to break through the British line ahead or astern of Victory but that ship poured such a tremendous fire into her, followed by several raking broadsides, that the whole Spanish division wore round and bore up. Horatio Nelson, in HMS Captain (primarily), also played a decisive role in this action.

In February 1798, Victory was stationed at Chatham under the command of Lieutenant J. Rickman. On 8 December, unfit for service as a warship, she was ordered to be converted to a hospital ship to hold wounded French and Spanish prisoners of war. In 1799, Rickman was relieved by Lieutenant J. Busbridge.

However on 8 October 1799 HMS Impregnable was lost off Chichester, having run aground on her way back to Portsmouth after escorting a convoy to Lisbon. She could not be refloated and so was stripped and dismantled. Consequently, now short of a first rate, the Admiralty decided to recondition Victory. Work started in 1800 but as it proceeded an increasing number of defects were found and the repairs developed into a very extensive reconstruction. The original estimate was L23,500 but the final cost was L70,933.

Extra gun ports were added, taking her from 100 guns to 104, and her magazine lined with copper. Her figurehead was replaced along with her masts and the paint scheme changed from red to the black and yellow seen today. Her gun ports were originally yellow to match the hull but later repainted black, giving a pattern later called the "Nelson chequer" and which was subsequently adopted by all Royal Navy ships after the Battle of Trafalgar. The work was completed on 11 April 1803 and the ship left for Portsmouth on 14 May under her new captain, Samuel Sutton.

Lord Nelson hoisted his flag in Victory on 16 May 1803 with Samuel Sutton as his flag captain and sailed to assume command in the Mediterranean on May 20. Nelson transferred to the faster frigate Amphion on 23 May.
On May 28 Captain Sutton captured the French Embuscade 32, bound for Rochefort from San Domingo. Victory rejoined Lord Nelson off Toulon on July 30 when Captain Sutton exchanged commands with the captain of the Amphion Thomas Masterman Hardy.

Victory was passing the island of Toro on April 4, 1805, when HMS Phoebe brought the news that the French fleet under Pierre-Charles Villeneuve had escaped from Toulon. While Nelson made for Sicily to see if the French were heading for Egypt, Villeneuve was entering Cádiz to link up with the Spanish fleet. On 7 May Nelson reached Gibraltar and received his first definite news. The British fleet completed their stores in Lagos Bay, Portugal, on May 10 and two days later sailed westward with ten ships and three frigates in pursuit of the combined Franco-Spanish fleet of 17 ships. They arrived in the West Indies to find that the enemy was sailing back to Europe where Napoleon Bonaparte was waiting for them with his invasion forces at Boulogne.

The combined fleet was involved in an indecisive action in fog off Ferrol with Admiral Sir Robert Calder's squadron on 22 July before taking refuge in Vigo and Ferrol to land wounded and abandon three damaged ships. Calder on 14 August and Nelson on 15 August joined Admiral Cornwallis's Channel Fleet off Ushant. Nelson continued to England in Victory leaving his Mediterranean fleet with Cornwallis who detached 20 of his 33 ships of the line and sent them under Calder to find the combined fleet at Ferrol. On 19 August came the worrying news that the enemy had sailed from there, followed by relief when they arrived in Cádiz two days later. On the evening of Saturday, 28 September, Lord Nelson joined Lord Collingwood's fleet off Cádiz, quietly, so that his presence would not be known.

When Admiral Villeneuve learned that he was to be removed from command he took his ships to sea on the morning of October 19, first sailing south towards the Mediterranean but then turning north towards the British fleet, beginning the Battle of Trafalgar. Nelson had already made his plans: to break the enemy line some two or three ships ahead of their Commander in Chief in the center and achieve victory before the van could come to their aid. In the event fitful winds made it a slow business. For five hours after Nelson's last maneuvering signal the two columns of British ships slowly approached the French line before Royal Sovereign, leading the lee column, was able to open fire on Fougueux. Twenty five minutes later Victory broke the line between Bucentaure and Redoutable firing a double shot broadside into the stern of the former from a range of a few yards. At 25 minutes past one Nelson was shot, the fatal ball entering his left shoulder and lodging in his spine. He died at half past four. Such killing had taken place on Victory's quarter deck that Redoutable attempted to board her, but the marines and small arms men repelled them. Nelson's last order was for the fleet to anchor but this was rejected by Vice Admiral Collingwood. Victory lost 57 killed and 102 wounded.

Victory took Nelson's body to England where, after lying in state at Greenwich, the burial took place in St. Paul's Cathedral on January 6, 1806.

Victory bore many Admirals' flags after Trafalgar, and sailed on numerous expeditions, including two Baltic campaigns under Admiral Sir James Saumarez. Her active career ended on November 7, 1812, when she was moored in Portsmouth Harbour off Gosport and used as a depot ship.

It is said that when Thomas Hardy was First Sea Lord, he told his wife on returning home, that he had just signed an order for Victory to be broken up. She burst into tears and sent him straight back to his office to rescind the order. Though this story may be apocryphal, the page of the duty log containing the orders for that day is missing, having been torn out.

Over the next century, Victory slowly deteriorated at her moorings. A campaign to save her was started in 1921 with the Save the Victory Fund under the aegis of the Society for Nautical Research, by which time she was in very poor condition. The outcome of the campaign was that British Government agreed to restore and preserve her to commemorate Nelson, the Battle of Trafalgar and the Royal Navy's supremacy during and after the Napoleonic period.

On 12 January 1922 she was moved into the oldest dry dock in the world: No. 2 dock at Portsmouth for restoration. In 1928 King George V was able to unveil a tablet celebrating the completion of the work, although restoration and maintenance still continued under the supervision of the Society for Nautical Research. Over the last few years the ship has undergone another very extensive restoration to bring her appearance to as close as possible to that which she had at Trafalgar for the bicentenary of the battle in October 2005.

HMS Victory is still in commission as the flagship of the admiral for the time being acting as Second Sea Lord in his role as Commander in Chief of the Royal Navy's Home Command. She is the oldest commissioned warship in the world, although the USS Constitution, launched 30 years later, is the oldest commissioned warship still afloat. Victory attracts around 350,000 visitors per year in her role as a museum ship.
This historic war ship is a symbol of the Royal Navy’s supremacy, a reminder of Nelson’s achievements and of Battle of Trafalgar; models of The Victory are in great demand.