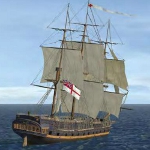 
Gold coins between parts of wreck

Initially Odyssey kept the origin of the treasure confidential. Knowledge of the recovery became public on May 18, 2007 when the company flew 17 t. ons of coins, mostly silver, from Gibraltar to a secure location of unknown address in Florida, USA. The company did not release the type, date, or nationality of the coins, while a rumor attributed it to the Merchant Royal, which sank near Land's End in 1641.

Odyssey Marine Exploration performed an extensive pre-disturbance archaeological survey of the "Black Swan" site, including recording over 14,000 digital still images which were used to create a photomosaic of the site. During the preliminary excavation, the recovery of artifacts was accomplished under the supervision of qualified archaeologists and followed rigorous archaeological protocols using advanced robotic technology.
On May 31, 2007, the Spanish government filed a claim against the recovered cargo based on the claim that the silver and gold coins recovered by Odyssey Marine came from a Spanish vessel, the Nuestra Señora de las Mercedes, a 36-gun Spanish frigate that went down off the Portuguese coast en route from Montevideo to Cádiz.

The Mercedes, which was sunk by British Navy ships in October 1804, was part of a small flotilla transporting silver, gold, vicuna, cinnamon and quinoa. It was later proved in trial that the recovered cargo was being carried by the Spanish frigate Nuestra Señora de las Mercedes, which sank off Portugal in 1804.
At the time, Odyssey said that it planned to return to the site to perform an excavation expected to uncover more coins as well as other artifacts. However, Odyssey was sued by the Spanish government in U.S. courts, which eventually ordered the treasure to be returned to Spain. Odyssey pursued all legal avenues, even taking the case to the U.S. Supreme Court and losing. In September 2011, The 11th Circuit Court of Appeals agreed with the lower court's determination that the unidentified ship was in fact the "Nuestra Senora de las Mercedes" and ruled that Odyssey Marine Exploration must return the 17 tons of silver coins and other recovered treasures to the Spanish government.

Treasure´s transport to the Spain

On February 27, 2012 the treasure was put aboard two Spanish military C-130 planes and it was flown back to Spain.

Since 2014, the treasure has been on display in several Spanish public museums as part of an extensive itinerant exhibit relating to the sinking of the ship, and the recovery of the treasure.