Golden Hind galleon ship story
The Golden Hind was an English galleon best known for her circumnavigation of the globe between 1577 and 1580, captained by Sir Francis Drake. She was originally known as Pelican, but was renamed by Drake mid-voyage in 1578, as he prepared to enter the Strait of Magellan, calling her Golden Hind to compliment his patron, Sir Christopher Hatton, whose crest was a golden 'hind' (a female deer). Hatton was one of the principal sponsors of Drake's world voyage. 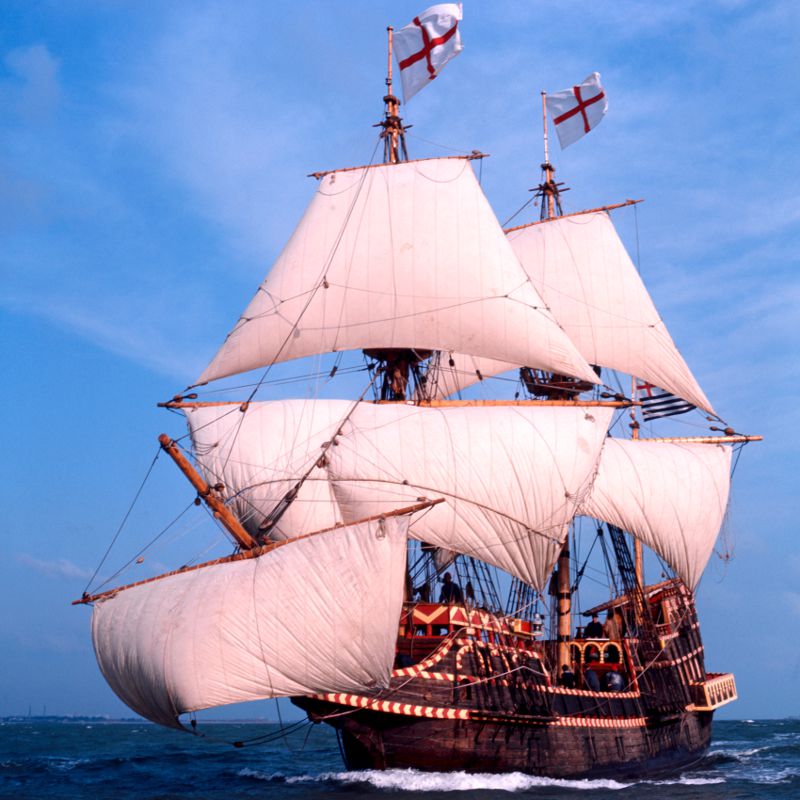 In the name of Queen
In 1577, Queen Elizabeth chose Sir Francis Drake as the leader of an expedition intended to pass around South America through the Strait of Magellan and to explore the coast that lay beyond. The queen's support was advantageous; Drake had official approval to benefit himself and the queen as well as to cause the maximum damage to the Spaniards. This would eventually culminate in the Anglo–Spanish War. Before setting sail, Drake met the queen face-to-face for the first time and she said to him, "We would gladly be revenged on the King of Spain for divers injuries that we have received." The explicit object was to "find out places meet to have traffic." Drake, however, acted as a privateer, with unofficial support from Queen Elizabeth.

Famous journey
He set out from Plymouth on 15 November 1577, but bad weather threatened him and his fleet. They were forced to take refuge in Falmouth, Cornwall, from where they returned to Plymouth for repair.
After this major setback, he set sail again on 13 December, aboard Pelican, with four other ships and 164 men. He soon added a sixth ship, Mary (formerly Santa Maria), a Portuguese merchant ship that had been captured off the coast of Africa near the Cape Verde Islands. He also added its captain, Nuno da Silva, a man with considerable experience navigating in South American waters.
Drake's fleet suffered great attrition; he scuttled both Christopher and the flyboat Swan due to loss of men on the Atlantic crossing. He made landfall at the gloomy bay of San Julian, in what is now Argentina. Ferdinand Magellan had called here half a century earlier, where he put to death some mutineers.
Drake's men saw weathered and bleached skeletons on the grim Spanish gibbets. They discovered that Mary had rotting timbers, so they burned the ship. Following Magellan's example, Drake tried and executed his own 'mutineer' Thomas Doughty. Drake decided to remain the winter in San Julian before attempting the Strait of Magellan. 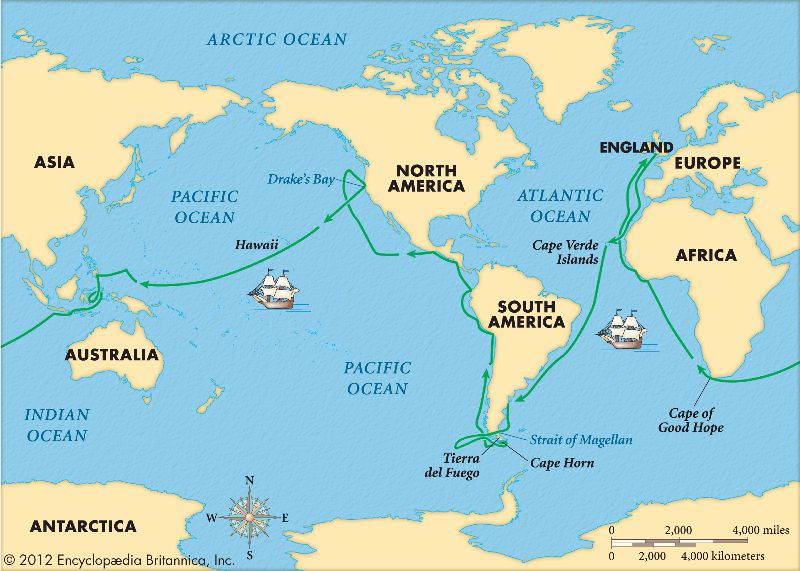 The Golden Hind´s circumnavigation of the globe

Entering the Pacific (1578)
The three remaining ships of his convoy departed for the Magellan Strait at the southern tip of South America. A few weeks later (September 1578) Drake made it to the Pacific, but violent storms destroyed one of the three ships, the Marigold (captained by John Thomas) in the strait and caused another, the Elizabeth captained by John Wynter, to return to England, leaving only the Pelican. After this passage, the Pelican was pushed south and discovered an island which Drake called Elizabeth Island.
He pushed onwards in his lone flagship, now renamed the Golden Hind in honour of Sir Christopher Hatton (after his coat of arms). The Golden Hind sailed north along the Pacific coast of South America, attacking Spanish ports and pillaging towns. Some Spanish ships were captured, and Drake used their more accurate charts. Before reaching the coast of Peru, Drake visited Mocha Island, where he was seriously injured by hostile Mapuche. Later he sacked the port of Valparaíso further north in Chile where he also captured a ship full of Chilean wine. 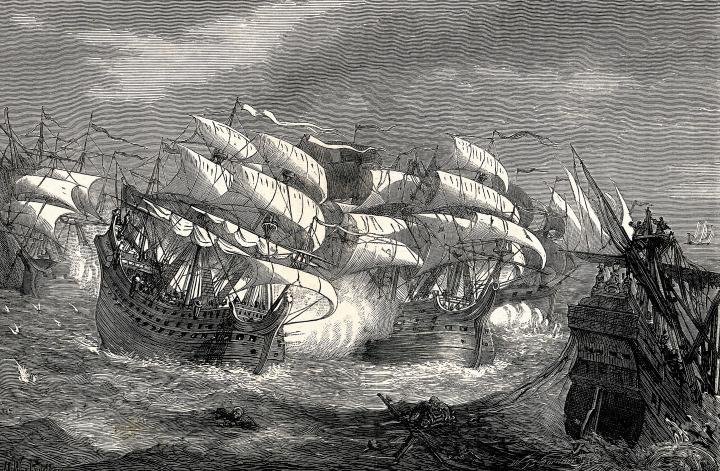 Capture of Spanish treasure ships
Near Lima, Drake captured a Spanish ship laden with 25,000 pesos of Peruvian gold, amounting in value to 37,000 ducats of Spanish money (about £7m by modern standards). Drake also discovered news of another ship, Nuestra Señora de la Concepción, which was sailing west towards Manila. It would come to be called the Cacafuego. Drake gave chase and eventually captured the treasure ship, which proved his most profitable capture.
Aboard Nuestra Señora de la Concepción, Drake found 80 lb (36 kg) of gold, a golden crucifix, jewels, 13 chests full of royals of plate and 26 tons of silver. Drake was naturally pleased at his good luck in capturing the galleon and he showed it by dining with the captured ship's officers and gentleman passengers. He offloaded his captives a short time later, and gave each one gifts appropriate to their rank, as well as a letter of safe conduct.

The Golden Hind sailed north along the Pacific coast

Coast of California - Nova Albion (1579)
Drake turned north, hoping to meet another Spanish treasure ship coming south on its return from Manila to Acapulco. Although he failed to find a treasure ship, Drake reputedly sailed as far north as the 38th parallel, landing on the coast of California on 17 June 1579. He found a good port, landed, repaired and restocked his vessels, then stayed for a time, keeping friendly relations with the Coast Miwok natives. He claimed the land in the name of the Holy Trinity for the English Crown, called Nova Albion—Latin for "New Britain". 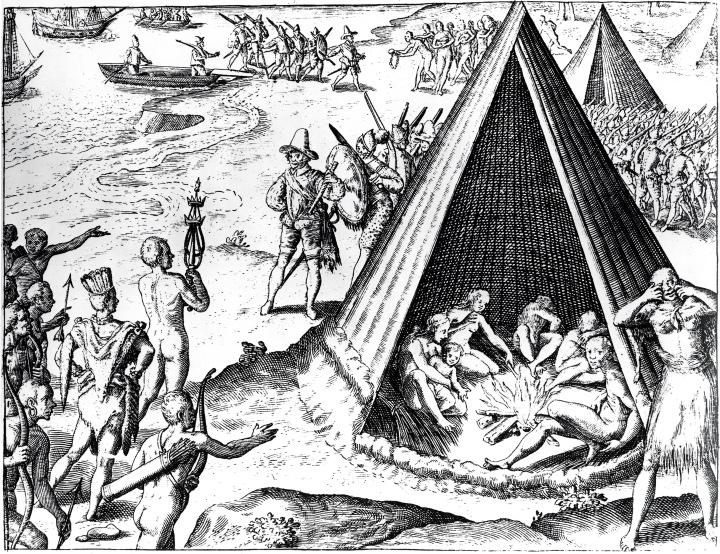 Across the Pacific and around Africa
Drake left the Pacific coast, heading southwest to catch the winds that would carry his ship across the Pacific, and a few months later reached the Moluccas, a group of islands in the western Pacific, in eastern modern-day Indonesia. While there, Golden Hind became caught on a reef and was almost lost. After the sailors waited three days for expedient tides and dumped cargo, they freed the barque. Befriending a sultan king of the Moluccas, Drake and his men became involved in some intrigues with the Portuguese there. He made multiple stops on his way toward the tip of Africa, eventually rounded the Cape of Good Hope, and reached Sierra Leone by 22 July 1580.

Return to Plymouth (1580)
On 26 September, Golden Hind sailed into Plymouth with Drake and 59 remaining crew aboard, along with a rich cargo of spices and captured Spanish treasures. The Queen's half-share of the cargo surpassed the rest of the crown's income for that entire year. Drake was hailed as the first Englishman to circumnavigate the Earth.
The Queen declared that all written accounts of Drake's voyages were to become the Queen's secrets of the Realm, and Drake and the other participants of his voyages on the pain of death sworn to their secrecy; she intended to keep Drake's activities away from the eyes of rival Spain. Drake presented the Queen with a jewel token commemorating the circumnavigation. Taken as a prize off the Pacific coast of Mexico, it was made of enamelled gold and bore an African diamond and a ship with an ebony hull. 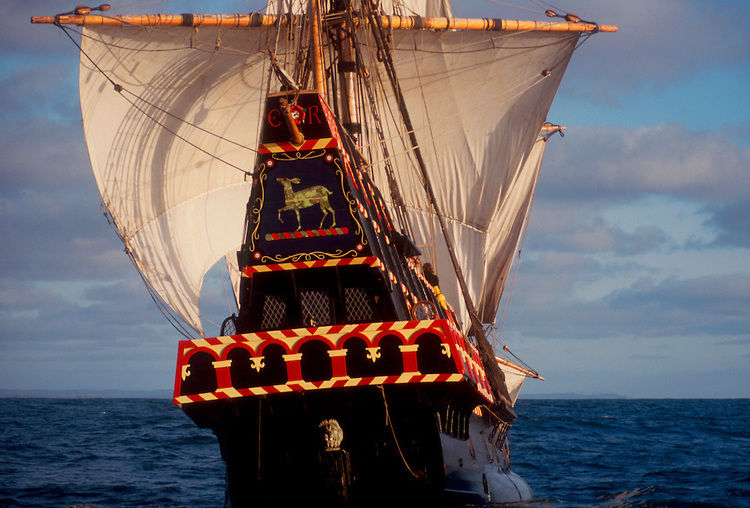 Profits
Despite his piratical conduct on his voyages, Queen Elizabeth I herself went aboard Golden Hind, which was lying at Deptford in the Thames Estuary, and personally bestowed a knighthood on him; her share of the treasure came to almost £160,000: "enough to pay off her entire foreign debt and still have £40,000 left over to invest in a new trading company for the Levant”. Her return and that of other investors came to £47 for every £1 invested." 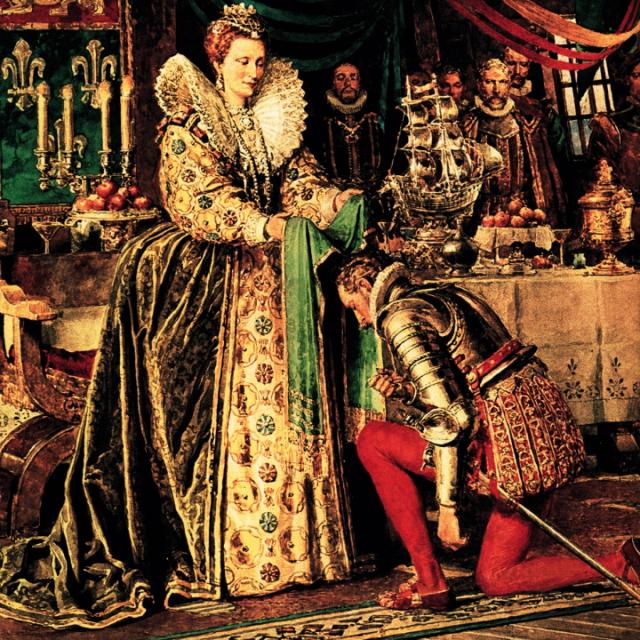 Queen Elizabeth personally bestowed a knighthood on him

Historical heritage
After Drake's circumnavigation, Golden Hind was maintained for public exhibition in Deptford. This is the earliest known example of a ship being maintained for public display because of her historic significance. Golden Hind remained there for nearly 100 years before she eventually rotted away and was finally broken up.
A table, known as the cupboard (pronounced "cup-board"), in the Middle Temple Hall (in London) is reputed to have been made from the wood of Golden Hind, as is a chair in the Great Hall, Buckland Abbey, Devon. Upon the cupboard is placed the roll of members of Middle Temple, which new members sign when they are called to the Bar. Replica of ship's lantern also hangs in the vestibule of Middle Temple Hall.

*Golden Hind replica photos were used in this article