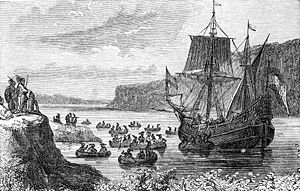 Half Moon sets sail
Hudson departed Amsterdam on 4 April in command of the ship Half Moon (Halve Maen). He could not complete the specified route because ice blocked the passage only a month out of port, as with all previous such voyages, and he turned the ship around in mid-May while somewhere east of Norway's North Cape. Hudson and his crew decided to try to seek a westerly passage through North America based on heard rumors.  At that point, acting entirely outside his instructions but Hudson pointed the ship to the west. 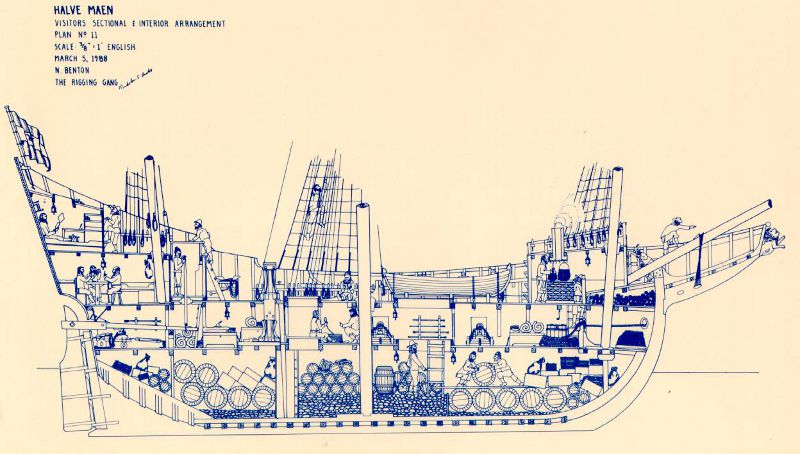 First landing
They reached south of Newfoundland, on 2 July, and in mid-July made landfall near what is now LaHave, Nova Scotia. Here they encountered Native Americans who were accustomed to trading with the French. The ship stayed in the area about ten days, the crew replacing a broken mast and fishing for food. Later a dozen men from the Half Moon, using muskets and small cannon, went ashore and assaulted the village near their anchorage. They drove the people from the settlement and took their boat and other property (probably pelts and trade goods).

Hudson River
On 4 August the ship was at Cape Cod, from which Hudson sailed south to the entrance of the Chesapeake Bay. Rather than entering the Chesapeake he explored the coast to the north, finding Delaware Bay but continuing on north. On 3 September he reached the estuary of the river that initially was called the "North River" or "Mauritius" and now carries his name. On 6 September 1609 John Colman of his crew was killed by Indians with an arrow to his neck. Hudson sailed into the upper bay on 11 September, and the following day began a journey up what is now known as the Hudson River. Over the next ten days his ship ascended the river, reaching a point about where the present-day capital of Albany is located. 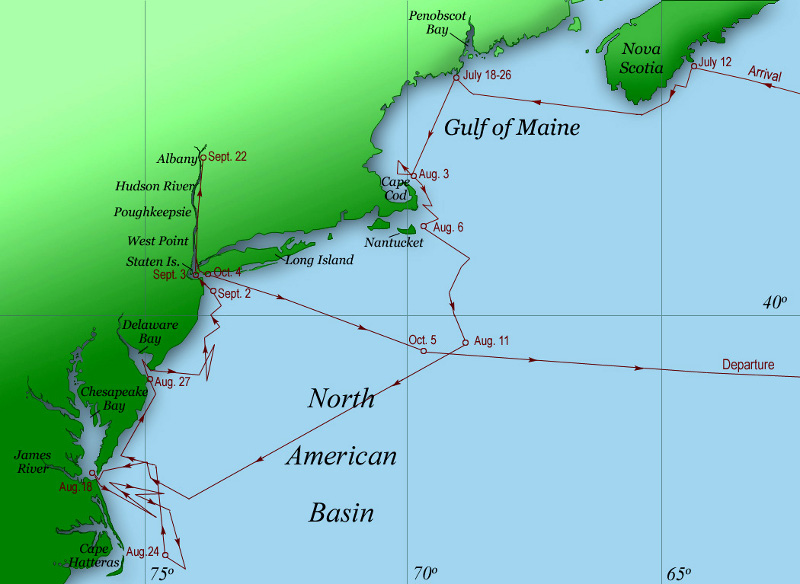 End of journey
On 23 September, Hudson decided to return to Europe. He put in at Dartmouth on 7 November, and was detained by authorities who wanted access to his log. He managed to pass the log to the Dutch ambassador to England, who sent it, along with his report, to Amsterdam.
A few years after, in 1618 the ship Half Moon was destroyed during an English attack on Jakarta in the Dutch East Indies.

Consequences
Hudson's voyage had important consequences. In making this historic journey, Hudson claimed the region for the Dutch and opened the land for the settlers who followed. The first European settlements in the States of Connecticut, Delaware, New Jersey, New York and Pennsylvania were built by the Dutch beginning in 1624 and formed the Dutch colony of New Netherland, or Nieuw Nederlandt. New Amsterdam on Manhattan Island became the capital of New Netherland in 1625.
By the end of the 17th century, all of New Netherland had become the possession of the British crown. Yet the maps of the region still reflect the original Dutch settlements. Brooklyn, Hoboken, Block Island and hundreds more places take their names from the first Dutch colonists. These names hint at the early Dutch role in establishing of American nation.