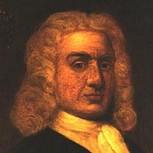 William "Captain" Kidd (January 22, 1645 - May 23, 1701) is often remembered in infamy as a cruel, bloody pirate. Indeed, he, along with his crew, has been accused of every crime in pirate history by popular tradition. He achieved perhaps more fame in song, story, and legend than any other pirate to sail the seven seas. However, historical record calls this characterization into question. It is more likely that Kidd earned his reputation through circumstance and did not consider himself to even be a pirate.

Kidd was born into a reputable family in Greenock, Scotland. (Aberdeen University researchers claim that Kidd was born in Dundee Scotland in 1645). However after the death of his father when he was five, Kidd's family's income was severely reduced. As a young man he chose to head out to sea, and bounced around freely from ship to ship for three decades. After war broke out between England and France, he showed courage and a bit of lucky timing in winning French ship and saving English troops from destruction. With his newfound prestige, he finally settled in New York in 1691, at the age of thirty-seven. There he married the 20-year-old twice widow, Sarah Bradley Cox Oort. They had two daughters: Elizabeth and Sarah Kidd. The marriage eventually brought to Kidd a considerable amount of property (after the legal dispute around her inheritance from her first husband was resolved.) During this time Kidd was respected as an honest, hard-working ship captain. He befriended many prominent colonial citizens, including three governors.

Later that year, on orders from the province of New York, Massachusetts, he captured an enemy privateer on the New England coast. Shortly thereafter, Kidd was awarded L150 for successful privateering in the Caribbean. One year later, "Captain" Culliford, a notorious pirate, stole Kidd's ship while he was ashore at Antigua in the West Indies. In 1695, William III of England replaced the corrupt governor Benjamin Fletcher, known for accepting bribes of one hundred dollars to allow illegal trading of pirate loot, with Richard Coote, Earl of Bellomont.

On December 11 that same year, Coote, who was now governing New York, Massachusetts, and New Hampshire, asked the "trusty and well beloved Captain Kidd" [citation needed] to attack Thomas Tew, John Ireland, Thomas Wake, William Maze, and all others who associated themselves with pirates, along with any enemy French ships. This preceded the voyage which established his reputation as a pirate, and cemented his image in history and folklore. 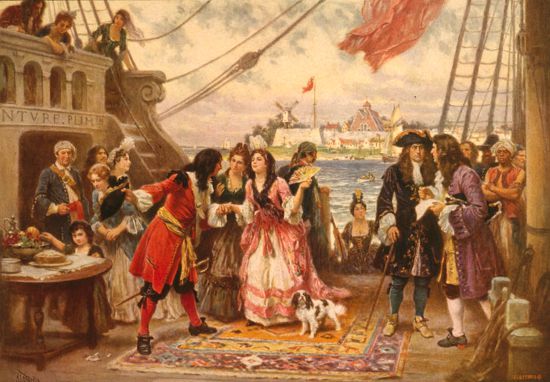 Four-fifths of the cost for the venture was paid for by noble lords, who were amongst the most powerful men in England; the Earl of Orford, The Baron of Romney, the Duke of Shrewsbury and Sir John Somers. According to Henry Gilbert writing in The Book of Pirates, Kidd's backers were rumored to include King William himself. In fact, according to a time-honored practice, the King would receive a tenth share of everything captured. Kidd and an acquaintance, Colonel Robert Livingston paid for the rest. Kidd had to sell his ship the Antigua to raise funds.

The new ship, the Adventure Galley, was well suited to the task of catching pirates; weighing over 284 tons, it was equipped with 34 cannons, oars, and 150 men. The oars were a key advantage as it would enable him to maneuver in a battle when the winds had calmed and other ships were floating free. Kidd took pride in personally selecting the crew, choosing only those he deemed to be the best and most loyal officers. Unfortunately, soon after setting sail he was stopped by the HMS Duchess, whose captain enlisted much of Kidd's crew for service in the navy, despite rampant protesting. To make up for the lack of officers, Kidd was sent replacement crew, the vast majority of which consisted of known and hardened criminals, some undoubtedly former pirates.


Hunting for pirates
In September of 1696, Kidd finally set sail again. However, more bad luck struck and a third of his crew soon perished due to the uncontrolled spread of cholera. To make matters worse, the brand-new ship developed many leaks. According to Gilbert, after taking a single French ship (which was legal under his commission) on the first leg of his voyage, he proceeded eastward to Madagascar but was not able to find pirates to take in that vicinity. Kidd then sailed to the Malabar Coast. During this time Kidd never attacked a single richly-laden Indian ship that passed before him, and probably was not yet pirate at the time. However, as it became obvious his ambitious enterprise was failing he became understandably desperate to cover its costs. But, once again, Kidd failed to attack several ships when given a chance, including a Dutchman and New York privateer. Some of the crew now deserted Kidd the next time the Adventure Galley anchored offshore, and those who decided to stay behind made constant open-threats of mutiny. On October 30, 1697, as William Moore, the ships gunner and strong follower of the mutinous crew, was sharpening a chisel on the deck, he saw Kidd walk by and furiously shouted "You have brought us to ruin and we are desolate! I could have put you in the way of taking that ship [the Dutchman] and be none the worse for it!" After an exchange of strong words, Kidd snatched up and heaved an ironbound bucket at Moore. Moore fell to the deck of a fractured skull, and died the following day. 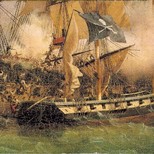 Acts of savagery on Kidd’s part were reported by escaped prisoners, who told of being hoisted up by the arms and drubbed with a naked cutlass. On January 30, 1698 he raised French colors and took his greatest prize, an Armenian ship, the 400 tons Quedagh Merchant, which was loaded with satins, muslins, gold, silver, an incredible variety of East Indian merchandise, as well as extremely valuable silks. The captain of the Quedagh Merchant was an Englishman named Wright, who was sailing under the promised protection of the French government. However, after realizing the captain of the taken vessel was an Englishman, Kidd tried to persuade his crew to return the ship to its owners but they refused. Thus, Kidd changed his focus and took his prize claiming it was legal prey for an English privateer. Unfortunately, when news of the deed reached England, along with horrifying tales of torture, the British East India Company declared Kidd a pirate. Various naval commanders were ordered to "pursue and seize the said Kidd and his accomplices" for the "notorious piracies" they had committed.

On April 1, 1698 Kidd reached Madagascar. Here Kidd found the first pirate of his voyage, Robert Culliford, (the same man who had stolen Kidd’s ship years before) and his crew sailing the Mocha Frigate. Kidd ordered his men to capture the Mocha Frigate. Instead his men mutinied and joined the pirates of the Mocha Frigate. Only 13 of Kidd’s men remained loyal to him.

Deciding to return home, Kidd left the Adventure Galley behind ordering her to be burnt because she had become worm-eaten and leaky. By burning the ship, he was able to salvage every last scrap of metal, for example hinges. With the loyal remnant of his crew, he returned home.

Prior to Kidd returning to New York City, he learned that he was a wanted pirate, and that several English men-of-war were searching for him. The governor (an investor) was away in Boston, Massachusetts. With the help of his lawyer, he negotiated with the governor in Boston and eventually agreed to come in to town. Regardless, (on July 6, 1699) he was arrested with his crew and placed in Stone Prison, spending most of the time in solitary confinement.

Kidd was eventually (after over a year) sent to England to stand trial, and on May 8 he was tried by High Court of Admiralty in London for the charges of piracy on high seas and the murder of William Moore. Whilst awaiting trial, Kidd was imprisoned in the infamous Newgate Prison and wrote several letters to the joint sovereigns, William III of England and Mary II of England, demanding clemency.

Kidd stood trial without representation and was shocked to learn at trial that he was charged with Murder. He was found guilty on all charges (murder and five counts of piracy) and was hanged on May 23, 1701 at 'Execution Dock', Wapping, in London. During the execution, the hangman's rope broke and Kidd was hanged on the second attempt. His body was gibbeted - left to hang in an iron cage over the River Thames, London, as a warning to future would-be pirates for two years. His associates Richard Barleycorn, Robert Lamley, William Jenkins, Gabriel Loffe, Able Owens, and Hugh Parrot were convicted, but pardoned just prior to being hung at Execution Dock. 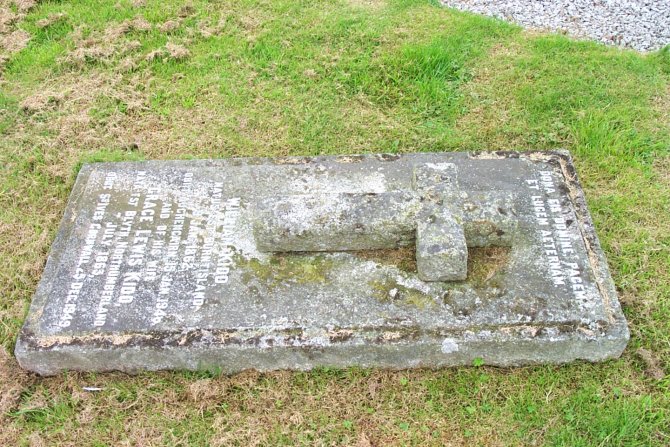